Passing by Blakes by the Lakes earlier this week on my Stand Up Paddleboard made me think about the history of this location at the south end of Lake Carlos. I have added an excerpt about Blakes by the Lakes from the book ‘And Then Came Summer…Alexandria Remembered” by Peggy Schoellkopf and Jane Carey DeLay (if interested in buying this book, it is currently in stock at Cherry Street Books in downtown Alexandria. 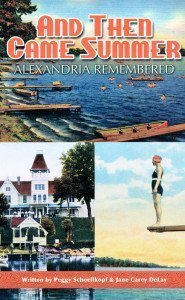 The rise and fall of the Blake Hotel is as much a part of local history as the arrival of the railroad. The trains brought people to Alexandria and the hotel kept them coming back, year after year after year. Its first owner, John Blake, opened for business in 1905. In 1923 he sold out – for $30,000 – to A.J. Dubeau, who changed the name to Blakes-by-the-Lakes and ran the hotel until 1947 when it was bought by the Awes family. During all those years it achieved fame and fortune, survived a disastrous fire and finally came to an inglorious end – a ghostly wreck of rotting timbers in a sea of weeds.

John Blake’s hotel was a success from the start, but under the DuBeau’s excellent management it reached its peak. The main building could take care of 80 guests – still more after Mr. DuBeau added four cottages, Oriole, Wren, Robin and Bluebird. Later he turned a log cabin on premises into a honeymoon cottage, Hummingbird, and now it’s the Dwight Skaggs’ guest house. In 1925 the rates were $10.00 a day, raised in the ’30’s to $15.00 and $25.00. For this modest sum guests ate three delicious meals a day (Amerrican Plan) in a lovely dining room built around a tree and overlooking Lake Carlos. Two nights a week there were fisheries at the DuBeau’s property on Carlos (presently the Luther Crest Bible Camp), and Saturday night everybody dressed-up and went to the dance. Sometimes Audre and Dona, the DuBeau daughters, performed – they are budding ballerinas – and always at midnight a sumptuous buffet supper was laid out on the kitchen tables. For several years Young-Quinlan from Minneapolis set up a small shop in the hotel, selling clothes and accessories and putting on style shows. Later their rooms were taken over by Frances Abrass who came out from St. Paul – as she still does! – to display and sell her fine linens. Two other features added to the guests’ pleasure: Polly, the parrot, and the flowers. Polly sat by the desk where she learned to mimic most of the guests using the phone. The flowers were Mrs. DuBeau’s department, picked by her at dawn in her garden and later arranged into colorful bouquets.

The guests came from all over the country – some with maids, many with chauffeurs and everybody with mountains of luggage. “At time”, Dona Skaggs recalls, “You could hardly get through the halls for all the trunks – especially Mrs. Duke’s.” While the ladies decided which dress to wear and socialized, many of the men went fishing. Most had regular guides and their schedules were so regulated that, at breakfast, you could tell the day by the back door where the guides, after picking up the lunch boxes, waited in line with their cars and boat carts. When they returned – with their limit, of course! -an especially fine catch would be spread on newspapers in the lobby, while guests gathered to admire and try to figure out which lake had produced it.

The following are only a few of the hundreds of names that appeared on the Blake’s registry. In June, during the early days, all cottages and most of the hotel were filled with Mayo doctors, including Will and Charles Mayo. Among the Minnourians, Dr. and Mrs. Chilton from Hannibal, Mo. were regular and long-time guests. The Morton Jourdans, Mr. A.B. Elias and Mrs. Pierce (Ruth Pennington’s grandmother) came from St. Louis. Kansas City was represented by the Fratchers and the Jeanneretts, the Frank Guytons and their nephew. The Eric Team family came from Wichita, the C.B. Teams from Fort Worth. A few of the many Tulsans were the Clyde Papes, Frank Walkers, Barney McCunes and Fitzgeralds. The Billy Clevelands and Dr. Berkner hailed from Houston, but the majority of Texans were Dallasites, many of whom went on to buy their own homes. Some who didn’t and became long-time guests were the John Dukes, the Charlie Maillots, the Tom Griffiths and the J. Edgar Pews. Bill and Marie Selby might be called the last of the old-timers. Their summers in Alexandria saw the Blake at its finest hour and ended shortly before the doors closed for the last time

Some additional interesting history (please correct me if my dates are off) is that in the 19070’s there was also a fire at the current Interlachen Inn location. At that time, it was Andy’s Interlachen Inn and after the fire Andy’s operated out of the kitchen at Blakes until the new, and current, building was constructed. It was also in the 1970’s that Blake’s was torn and were replaced by the current condominium buildings. A “did you know” piece of information is that during the Interlachen years at Blakes that it was discovered the well water wasn’t coming from a well but Lake Carlos itself!