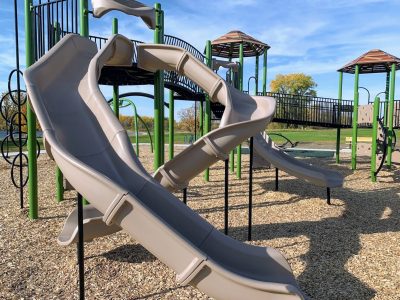 The lakes are at the top of my list of reasons why I love Alexandria. The Central Lakes Trail is very close to the top. A portion of the trail passes by Lake Brophy and through Brophy Park which I pass by many times on wheels (inline skating and biking). Last year and this year I have observed the progress of the expansion and addition of attractions at Brophy Park such as a large playground. In August of this year Douglas County opened the new playground for kids to enjoy. Each time I passed by it in August and September prior to the start of the new school year, I was impressed with how many kids were playing at it. It has been a hit.

Some Details about the Playground

Funding for the playground and other improvements (the mountain bike trails have separate funding) at Brophy Park was approximately $400,000 from taxpayers and $800,000 from a legacy fund as a result of Minnesota’s Legacy amendment. The equipment for the park is manufactured by a Fon du Lac, Wisconsin company named BCI Burke Co. The entire playground is ADA accessible and covered with a rubber, bouncy surface. The portions without the rubber surface are covered with engineered fiber wood chips. More work is planned and soon there will picnic shelters and it will be possible to reserve them which would be ideal for a birthday party.

The weather was ideal yesterday and with an ugly short-term weather outlook in Douglas County I made time for a bike ride on the trail and made a point of passing by the playground. With it being a school day morning I knew there would be very few children, if any, at the playground so I wouldn’t make anyone nervous walking around taking photos.What is cool about it besides the fun features and being lakeside is that education has been incorporated into the fun. Some of them can be seen in the photos I have included below.

There are a few neighborhoods (Algonquin Trail is one example) along the trail or near the park that makes it easy for those that live in them to easily reach this part of Brophy Park by foot or bike.