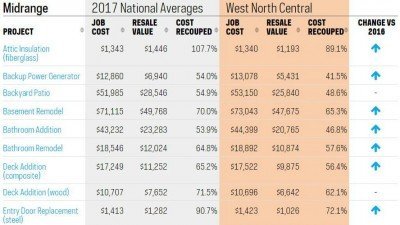 Remodeling Magazine each of the last thirty years has published a report called Cost vs. Value. Their objective is to pass on to the public uninfluenced information about what it will cost to have a professional complete a remodeling project and, based on opinions of real estate professionals, how much it will raise the home’s value if it were to be sold within a year. The data they collected for 2017 is from 29 types of project in 99 markets across the United States.

In Remodeling’s summation of the national date, they wrote

To understand the 2017 Cost vs. Value report, think “greige.”

Greige—a mix of gray and beige—is said to be one of the hottest colors around, despite it being such a subtle tone. It’s the same thing with Cost vs. Value: This year’s report is more about several small, incremental improvements rather than colorful jolts. It’s a greige kind of year.

The 29 projects in the 2017 report paid back an average of 64.3 cents on the dollar in resale value. We add and remove projects just about annually, but if you focus solely on the 24 projects that we’ve tracked for the past six years, their payback for 2017—also 64.3 cents—is only about three-quarters of a penny higher than in our report for 2016.

Those changes are minimal because the differences in the underlying numbers are minimal. The average cost for those 24 projects rose 3%, while the value that real estate pros put on the projects went up 4.2%. Minor gains, yes, but welcome ones compared with the trauma induced by the Great Recession nearly a decade back.

Both recent and long-time trends continued. “Curb appeal” projects­—changes to doors, windows, and siding—by and large generated higher returns on investment than work done inside the home. Meanwhile, projects that called for replacing something, like a door or window, scored higher among real estate pros than did remodels.

You can read more about the 2017 report and see the numbers for the West North Central States Region and also download a PDF containing a report for Minneapolis. Even if thought of selling is a distant or currently non-existent thought, it is good information to know.