The Boston Bruins and Toronto Maple Leafs played game five of the Eastern Conference semi-finals last night (won by the Leafs so the series heads back to Toronto for game six) and I turned on NBC thirty minutes prior to the puck dropping at TD Garden in Boston. I found an episode of Ron Schara’s Minnesota Bound and I watched the entire show. Quite interesting. 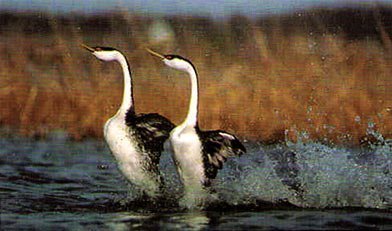 Not only did a learn of a museum in Winona, Minnesota that is home to home to major works by Picasso, Van Gogh, Monet, Gauguin, Cézanne and more, I also learned something new about Lake Osakis and about a bird called the Western Grebe. Each spring they gather at Lake Osakis for a mating dance and there is even someone that gives tours to see it. While I love traveling to other countries and returned earlier this year from a great visit to France and Italy, I am constantly reminded of not only how many beautiful and interesting things there are to see, that I haven’t seen, not only in the United States but in Minnesota itself.

If you missed this episode of Minnesota Bound or would like to watch it again, here is a link to the segment of the show about the Dancing Western Grebes. The story about the Minnesota Maritime Art Museum is at the beginning of the show. This museum is on my “must visit soon” list.